The Presence of Screens is Becoming (and Has Been) All-Consuming

That was my thought while sitting in a Barnes and Noble coffee shop in High Point, NC about 2 years ago while grading papers. I was watching a group of about 5 men in their 50’s and 60’s all sitting around drinking coffee and talking about the history of the Doors. I could hear them nerd-ing out about Jim Morrison and the supremacy of the Doors. They had a stack of books on their table, which all looked to be like these Rolling-Stone-anthology-like books full of pictures of rock bands from the 1960’s. I only got bits and pieces of their conversation, as I graded cause and effect essays for my English 111 students. These guys looked relaxed. They told stories and laughed a lot.

I came to the conclusion that when I am in my 50’s I want to be sitting around somewhere, anywhere talking about music with my old bro friends. Not for 5 minutes, but for maybe an hour or two every week drinking coffee and maybe eating breakfast somewhere. It could be at Barnes and Noble or at the local diner. Whatever the case-----I want to be sitting around a table with friends casually talking about music when I get into my mid-50’s.

I tell this story because my main concern about my generation is that I do not think we are on track to achieve the kind of community and friendship that I saw in these men. The Baby Boomers are not a shining example of perfection when it came to modeling healthy community and friendship. But I do think my generation has to be intentional about investing in the friendships and family around them if they want to achieve something better than Baby Boomers.

I believe the biggest threat for my generation is not whether we’ll be as smart as the previous generation, as hard-working enough as the Greatest Generation or as ambitious as the Boomers-------but whether or not we will have the kind of quality friendships with those around us.

I am afraid we’ll be socially isolated.

The two reasons why I believe Millennials are going to be a socially isolated generation has everything to do with electronic screens: (1) Milllennials often fail to realize that they were born into a screen-friendly American culture that their parents participate in. (2) Recent research on younger Millennials (and part of Gen Z) has shown how much time they spend on their IPhones, which has resulted in more social isolation.

Reason 1: Millennials Live in a Screen-friendly Culture Created by Their Parents and Grandparents.

That narrative that I hear most often is that Millennials were the first generation to be screen-obsessed. However, Millennials weren’t the first to do this. The habit of to looking at a screen for multiple hours a day became popular in the 1980’s when Boomers and the Greatest Generation were in running the nation's cultural trends. Their screen of choice was the television. While Millennial parents are being grilled (rightfully so) about handing their child an IPad, Boomers were sitting us in front of televisions to occupy us. In fact, starting in 1985, shortly after the time the oldest Millennials were born(1980), the normal American watched television 7 hours a day according to Nielson. 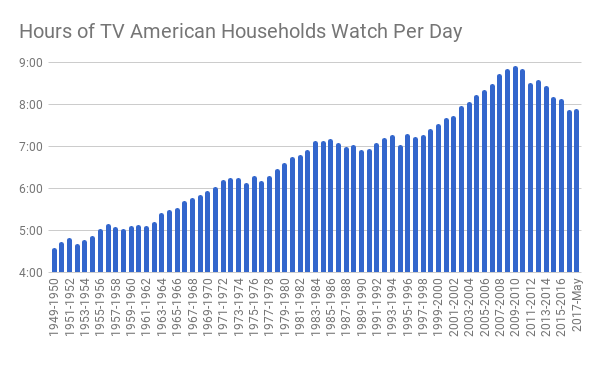 Here's the article I took this chart from. Most Boomers were in their mid-20’s and 30’s in 1985 and those in the Greatest Generation were in their 50’s. In the 1980’s America became a nation that regularly watched a screen for multiple hours a day. Some Boomers need to come to the realization that if they are going to criticize Millennials for using their Smartphones all the time, it was their generation that helped create a culture that welcomed screens with open arms.

Watching more than 6 hours of television a day starting in the 90's matches up with my experience as a child. My family got cable television about the point when I entered middle school, which was 1995. I remember from the time I arrived home from school at about 3:30pm until I went to bed at night the television stayed on. I remember watching Saved by the Bell almost every day after I got home. However, I often went outside and played backyard football with my brothers and cousins after school as well. We’d play sports till dark. However, I could easily watch 4-5 hours of television a day once we got cable television. Along with that, my family also started leaving the television during dinnertime, since the TV was at an angle that was visible from where we ate. As a middle school kid, I loved this.

Yet not everybody was happy about this. David Foster Wallace in his 1993 essay“Television and Fiction” in response to the effects of a person watching 6-7 hours of television a day. He says:

Wallace saw watching this much television on a regular basis a recipe for Americans becoming passive, especially socially passive. He also saw cable television as making Americans more cynical about community and other people. He says a daily habit of watching television makes people into watchers, observers and people who make “appearances” rather than “doers and be-ers.”

What social effect does this have on Millennials, Gen X, Boomers and the Greatest Generation? These were the 4 generations watching television in 1993 when Wallace wrote these words. It means that those “prodigious TV watchers” were more likely to engage in the "screen world" than the real world. Wallace’s conclusions sound exactly like the criticisms that are made against Millennials today: the lack of face to face interaction and the posture of being an observer rather than a participant which results in less real world experience. He’s saying all this about television in 1993.

The habit of immersing one’s self into a screen did not start when the IPhone was invented. It started before they were born and gained traction in their childhood as millions of older Americans were watching cable television. Previous generations have helped create an even more screen-friendly culture since the 1990’s by installing TV screens in airports, at the doctor’s office, at the gas station, in every room in the house and in most classrooms in America as “Channel One” informed students about the news.

All of this greatly reduces the opportunity for human connection among friends, family and strangers. And all of this started in the 1980 and 1990’s.

What hope can Millennials take from this? They need to realize that cable television is the Baby Boomer and the Greatest Generation’s IPhone. If we look at the Nieslen chart above, they are as dependent on cable as we are for our phones. We need to change the narrative that Millennials are the first generation for staring at a screen for multiple hours a day.

Why? What if Millennials follow in the footsteps of their parents of passively starting at a screen as they mature into adulthood?

We have a glimpse of what that looks like if we look at generational expert Jean Twenge's recently published article (2017) in the Atlantic titled “Have Smartphones Destoryed a Generation?” This sounds like a predictable article title that imputes predictable stereotypes onto Millennials. However, Twenge is considered to be one of the top generational experts in America and is a professor at San Diego State University where teaches psychology. Her article was based off her recent studies of those between the ages of 12-23.

She concluded that the Smartphone’s social effect on that age demographic (in whom she labels “IGen”) is alarming to the future of the social lives of American teenagers. This study confirms many of our fears concerning teens become less social. Twenge explains that while young people today have more leisure time than previous generations, they use this extra time “on their phone, in their room, alone and often distressed.” She also explains that the number of teens who go together with their friends every day dropped 40% from 2000-2015. This is a sign that teens today are spending less time both hanging out casually and partying. Her study concluded that teens who spend more time doing "on-screen activities" are less happier than those who spend time doing activities that do not involve a screen.

Yet Twenge explains that young people today are not happy with this. She paints a bleak picture of the social habits of current teenagers, but also explains for their longing for authentic face to face interaction. They aren't happy with this lifestyle. Twenge tells the story of a teenager named Athena who is frustrated with her friends who look at their phones more than they look at Athena in the face while talking. Twenge shares this about Athena’s reaction to her friend once:

Once, she told me, she was hanging out with a friend who was texting her boyfriend. “I was trying to talk to her about my family, and what was going on, and she was like, ‘Uh-huh, yeah, whatever.’ So I took her phone out of her hands and I threw it at my wall.” I couldn’t help laughing. “You play volleyball,” I said. “Do you have a pretty good arm?” “Yep,” she replied.

This pushes against the notion that young people are happier doing everything on Snapchat and are accepting this as the "new normal." Twenge's study is pretty straightforward into offering a solution regarding this trend:

“If you are going to give advice for a happy adolescence based on this survey, it would be straightforward: Put down the phone, turn off the laptop, and do something---anything---that does not involve a screen.”

With that said, we can conclude that Millennials and Generation Z (those born after 2000) need to try and limit the number of hours and minutes we spend on our devices for a day.

As I’ve said earlier, the generational criticism often drifts towards calling a generation lazy, lacking intelligence or lacking ambition. But as Twenge’s study shows, our generation needs community and friendship just as much as preparation for leadership positions in the future.

Let’s think again about the Barnes’s and Noble group of 50 year old men who love the song “Riders on the Storm” one more time. These guys were not watching cable television nor were they on their Smartphones (as many Boomers have come to embrace). They were unplugged completely from screen culture and intentionally living an analog life. They were walking to a different beat in contrast to American plugged-in culture.

What do Millennials need to do? Like those Boomers, we need walk to a different beat from from 21st century screen-addicted America. This won’t be easy, but pushing for a culture with less screens to distract us from those human beings around us is the best way for us to create true community for our future.